I am a huge fan of Oprah. People can say what they want, but when she focuses on a topic she makes a difference. For some reason, the way she puts things out there makes me want to better myself and the world. (sad but true) As a matter of fact, after the episode about the importance of going green, and the garbage that is piling up in the Pacific Ocean I began recycling, I stopped using paper plates, and I use paper towels much less. Wednesdays episode had a similar affect on me. In this episode she spoke about the book Food Rules, the movie Food Inc,and featured Chipotle. The images were shocking, and she made me want to join what she called “A Food Revolution”.

I eat bad…I mean really bad. I make efforts sometimes, but even the food I THOUGHT was good really isn’t! I have heard about buying organic, or free range, but how can I afford it? But after seeing this episode of Oprah, I have to ask myself what is it costing me health wise? 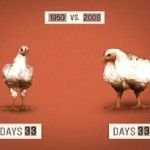 Check out the picture of the two chickens. Both are 33 days old…but the one on the right is filled with hormones to make them bigger faster! They also said that people want so much “breast meat” that they engineer the chickens to actually have BIGGER BREASTS! Doesn’t sound very natural to me! How about these statistics??

It’s so true! When I shop I buy the cheapest milk, the cheapest chicken, and the cheapest vegetables. What I found most interesting is what he said about what eating this is going to do to our health in the future. Do we even know? Do we want to eat chickens that are treated like this????

I have heard that the easiest way to start to change the way you eat these items is to buy Organic Dairy, Fruit, Vegetables,  free range chickens, and grass fed beef. Could doing that be so hard? Will it really cost THAT much more? But if it does cost THAT much more, is my health worth the extra dollars???

This figure saddened me a bit…

This issue extends much farther than your local drive-thru. It’s also affecting our local supermarkets. Michael says experiments have found that $1 can buy you 1,250 calories worth of food in processed food aisles. “Take the same dollar to the produce aisle? You will get only 250 calories of broccoli or carrots,” he says. “We’ve made it rational to eat badly.”

How bad is that? But it’s so true! It’s expensive to be healthy! And how can we stand for that? We are such a fat, and unhealthy country….why do we do this to ourselves?

So maybe this was an eye opener for me. The Captain thinks I will buckle once I see how much it really costs to eat the way we are supposed to. To me that just spells CHALLENGE! So I am challenging myself to do better. I want to do what Oprah calls LEANING towards change. That means taking it slow and making small steps, but in the end small steps could equal big change. So who’s coming with me?