Get Inspired! Little Ways to Decrease your Carbon Footprint

Get Inspired! Little Ways to Decrease your Carbon Footprint 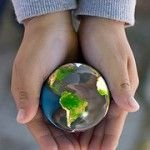 I figured that since everyone else was talking about the environment last week, since last week was Earth Day, that I would be original and give my thoughts this week. I have never been environmentally conscious, (I know I know I am awful) but after watching all the specials for Earth Day, I am a changed woman.

I was always frustrated by the fact that people would preach and preach about how we need to help the environment (don’t get me wrong I agree), but then when you try asking how you can help you get answers like “Buy Green Products” (which are double the price), “buy energy saving light bulbs” (that cost $40 apiece), “Start a compost pile” (really?) “take public transportation” (not really an option I live in the suburbs) Those answers didn’t satisfy me and actually made me feel defeated because most of the ways people tell you to save the planet is by doing things the average person just isn’t going to do (sad but true).

This Earth Day – I Have Seen the Light

Fast forward to Earth Day 2009. I have been inspired. Oprah did a show on Earth day titled “Earth Day 2009: Go Green, save money

“. Wow…this would be what Oprah calls and AHA moment. There was this whole segment about the fact that there is a garbage dump the size of TEXAS floating out in the Pacific Ocean. The pictures were shocking! The below quote is from Oprah.com

Currently, scientists believe the world’s largest garbage dump isn’t on land…it’s in the Pacific Ocean. The Great Pacific Garbage Patch stretches from the coast of California to Japan, and it’s estimated to be twice the size of Texas. “This is the most shocking thing I have seen,” Oprah says.

In some places, the floating debris—estimated to be about 90 percent plastic—goes 90 feet deep. Elsewhere, there are six times more pieces of plastic than plankton, the main food source for many sea animals.

Where did this trash come from? Marine biologists estimate that about 80 percent of the litter is from land, either dumped directly into waterways or blown into rivers and streams from states as far away as Iowa….

This baffled me. I always knew that there was problems with trash and pollution, but seeing pictures of it and being described in that way really made it hit home. Also on the show they told of easy everyday ways that you can help. This is what I liked the most. It made me feel that I could make a difference.

These are the Things I found that I Can Do:

In reality this list isn’t much, but at least it’s something. Can you imagine what a difference it would be if everyone made just one change in their wasteful lifestyle? So let’s go people! Get inspired like I was! In our own way we can all make a difference. What do you do that helps the environment! Let’s share here so everyone can find what works best for them!