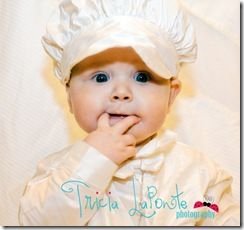 I should be thoroughly embarrassed that I am just now writing about my son’s christening which happened almost 2 months ago! It was such a beautiful and special day, and I wanted to take the time to write about it properly. I married a Greek and my son was baptized Greek Orthodox so since I grew up as a Catholic I had a lot to learn. I attended my first Greek wedding at my own, and now I attended my first Greek Christening…my sons!

In the Catholic religion you are baptized, have First Communion and then Confirmation. That’s not how the Greeks do it. All of those things are done at the Baptism. Therefore, we had one big party to throw. 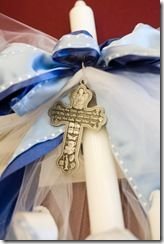 As Godparents we chose my sister, and The Captain’s older brother. The role of the Godparent in the Greek religion is a VERY special one. Not that it’s not special in other religions, but from what I see, they take it EXTREMELY seriously. Traditionally, the Godparents provide pretty much everything for the event….all the ceremonial items, crosses, candles, witness pins, the christening outfit and favors. I personally wanted to choose the outfit (call me a control freak), and we felt that we would buy the favor since we felt the rest put a large financial burden on them. But they took their role in stride and everything came out beautiful.

The ceremony is truly beautiful and symbolic. I have to admit that I didn’t totally listen to it all because I was so worried about how my little man would do. Let’s just say for some of the ceremony he is completely naked and in a nice WHITE blanket, and the particular blanket we used was made by my mother in law out of her wedding dress. So needless to say I was a bit worried there would be a messy accident. But I had nothing to worry about. Our little man took it all in stride. Even when the priest repeatedly dunked him in holy water! 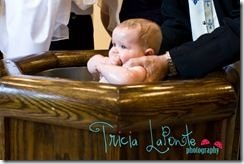 Our party after was held at a local restaurant. Our original guest list was 116 people, but we ended up with 80 who attended. The Captain and I had to compromise because I wanted a small back yard event with family, and he would’ve liked a large “wedding like” event at a catering hall. The restaurant was our compromise. We decided to go with cupcake trees as centerpieces. I figured I’d kill two birds with one stone…pretty centerpieces and dessert in one shot! The woman who made them is AMAZING! Paticakes also did my shower cake/cupcakes and I plan to use her for all my events. Not only are they pretty but they taste so YUMMY! 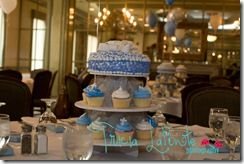 Our little man was a champ all day long. He was pleasant to all the guests who came to celebrate his day, and I was so happy to see all our friends and family there to honor our son. We are truly blessed to have so many great people in our lives.