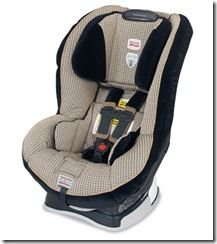 The time has finally come that my son no longer fits in his infant car seat. Even before his was born I worried about how I would carry that seat around, being that I am such a wuss, but somehow I did it. Now he has almost reached the maximum weight limit, and I was forced to choose the next seat that would serve him for a few years. It’s a big decision considering the amount of time we spend in our cars these days. I always knew that I wanted a Britax car seat, since they are known for being the best. The trouble I had was choosing WHICH car seat to choose! After a ton of research I finally made a decision. The Britax Boulevard 70 CS was the seat for me!

I think we are all bound to go crazy with all the options a person has when it comes to anything baby. I am constantly left to second guess myself! But at least when it came to car seats I knew that I wanted a Britax. When it comes to my sons safety I have to go with the best.

I knew that I wanted to go with one of their Next Generation Convertible Car Seats. These seats can be used rear facing from 5 to 40 pounds and forward facing from 1 year and 20 pounds, up to 70 pounds, depending on the seat. I narrowed it down to both the Marathon 70 and the Boulevard 70 CS . The main difference between the two is that the Boulevard is a bit more expensive, and has true side impact protection. Basically, the Boulevard has a “winged” headrest, and the marathon does not. So my question was….is the extra feature worth the extra money? And for me, the answer was yes. With so many accidents being side impact, I knew the extra safety feature was a good idea.

So I had our new car seat professionally installed at a car seat safety station, and my son is officially out of his infant seat! I think he likes it! I know he likes the “winged” headrest! He fell asleep right away. I have a feeling it will be great for napping! He looks like such a big boy!

I was provided with a Britax Boulevard 70 CS for the purposes of this review. As always all thoughts and opinions are my own.