Saying I Love You

Home/marriage/Saying I Love You
Previous Next

Saying I Love You 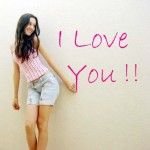 We all know that there are many reasons for us to say I love you. There’s the every day I love you, the intimate I love you, the I’m saying I love you because I know you are mad…and many others. Those three little words can say so much, but do we say them enough? Or do actions speak louder than words and sometimes we don’t even have to say them at all? Maybe it’s a combination of both?

I have been picking on The Captain recently because I told him I am always the one to say I love you first. He always says it back, but sometimes it’s just nice to have someone look at you and tell you they love you. He is actually very good at saying those 3 little words when he thinks I am mad at him though! When he says it then it sounds more like a question than a statement but I let that slide. We are not that couple that says I love you when we get off the phone, or even throughout the day but I do like to make it a point to look at him at least once during the day and tell him I love him. I really think it’s important for people to do that because even though we KNOW our partner loves us…it’s always nice to HEAR it being said.

I wrote a post a while back titled “Did You Say It?” which I wrote to remind myself and others not to take those you love for granted, and to be sure to let them know in words how much they mean to you. I look back on that post now and realize that I really took those words to heart. If you have time take a second to read it…it’s ok…I’ll wait….Done? Good! Don’t you agree?

Do you think women put more meaning into those three little words then men do? I do. I think women wait for that first time that their man utters I love you. They wait for the moment that he will look her in the eyes and sincerely say that he loves her. (I know I’m a hopeless romantic) I wonder if men find those moments to be as important. I can remember when The Captain and I first had the I Love you conversation. We were so young.

Are you a big fan of the words I Love you? Are you that person that says I love you every time you get off the phone? I’d love to hear the story where you first heard those beautiful three words. Who said them first?