Home/baby/We Are Having A…..
Previous Next 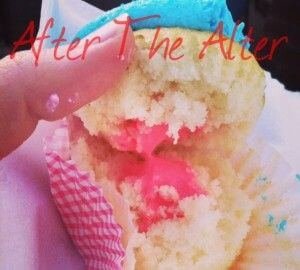 Can you believe it hop hop? You are a girl! I have to start out by saying I couldn’t have asked for a better day. I was looking forward to this day for so long, and to be honest everything went even better than I imagined. I’m not going to lie, it was super hard waiting through the sono and knowing that both the sono tech and our baker knew whether our baby was a boy or a girl. But I have to tell you finding out the way we did was so much more exciting than it would’ve been in the office.

We decided to take our 3 1/2 year old little man to the appointment. He’s been so into the baby that I thought he would love it. Live and learn I guess because it was a disaster. OK, well not a disaster, we made it through and he didn’t break anything, but he had zero interest at all and kept asking to leave. The Captain almost had to take him out of the room, but I am glad he didn’t have to because I didn’t want him missing any of it. Oh well….what can you do?

The tech new right away what the baby was. Captain Awesome believed it meant it was a boy because he figured if you know quickly it means you saw the goods. I said they just know what they are looking for. The moment she knew we had her text our baker which is a family friend who was nice enough to rush our cupcake order for that same day. She texted the gender so she could get started right away. Then it was killing me….was it a BOY OR A GIRL!? Well we only had a few hours to wait….tick tock..tick tock…

We got home to my parents and sister, brother in law and niece at our house. Always a treat and had to get ready for the party which was set to begin at 5:30. I was so happy with the enthusiastic response from family and friends who all wanted to come to celebrate. On a side note, since we moved into our home over a year ago NOT ONE of the parties I have tried to plan that would involve being outside (at least 4) ended up with us being outside. That is why I was sooo happy that the weather was in the 60’s and sunny. I am not sure what I would’ve done with about 40 people in my house including a ton of kids…but I was going with it. Luckily I didn’t have to find out!

I knew the cupcakes would arrive between 6 and 7 and as the clock ticked on I started to get anxious! Dinner was served and next thing I knew it was 7….Where were the cupcakes!? Finally, they arrived. We decided that our little man would be the one who would take the first bite to find out whether the insides were pink or blue. You didn’t have to ask him twice to eat a cupcake! 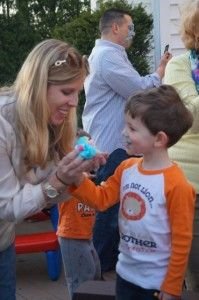 His first bite was small, but I could see a little of what was inside…as I told him to take a bigger bite he did, and revealed the PINK icing inside!!! All of Captain Awesome’s guy friends who wore pink for the occasion cheered and smashed a cupcake in his face. Everyone else cheered and clapped and I was in shock. NEVER did I believe that I would have a girl. Not gonna lie…I’m super happy about it. But I just felt destined for boys. So when I saw that pink I cried. I held it in pretty good I think…no sobs. In fact I don’t think it has even sunk in yet!

People joke about gender reveal parties, but I have to tell you, that if you are looking to find out the gender of your baby, and you enjoy a good party then it’s the way to go. The excitement was exactly what I was looking for this time around since finding out we were having a boy the first time around seemed so anticlimactic in the sono tech’s office. Being surrounded by friends and family to celebrate was amazing. This baby deserved that celebration. Especially since the second time around there is no shower, or registering or presents. THIS was my baby’s party and I loved every second of it.

So two thumbs up to the gender reveal party! I will post more about the details of the party later.